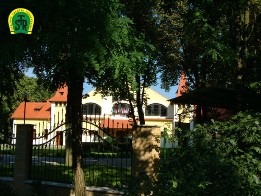 In the dark of night, just two hours after midnight, the alarm clock went off. Feeding, bridling and saddling took a maximum of sixty minutes. Riding went on till nine o'clock, saddling up, getting off and wiping the sweat off each horse with straw. Only after that was there a moment for the men to consider their own stomachs. This was the daily regime at the training center led by Russian Osip Osipovich Slobodinský, a pioneer in equestrian sports who ran the center from 1927 until 1944. The same went for lunch. In the time from breakfast till the noon lunch hour saddles had to be cleaned and the horses fed and bridled. Lunch never took more than an hour, and from one to three was the time for the mandatory nap. After an hour of gymnastics for the men it was again time for another runaround, with each task having a specific time allotted to it. From four to five in the afternoon feeding, cleaning the harnesses and sweeping the grounds, after which evening training study and preparation for exercises went on until eight o'clock. After that the men finally had time off until two in the morning. This was the time when they crawled into their beds in their spartan rooms, where everything smelled of horses. Every day must have reminded them of their time served in army barracks. This is how the men remember their former lifestyle at the stud farm, and the famous riders František Hrúzik and Dominik Pružinský remember it the same way when they started work at the stud farm as fourteen-year olds.

Horse breeding tradition in Slovakia has been rich on general economics, social, breeding, sport and turf area. Horse  has had a meaningful position in whole world. Horse markedly accompanies the human more than 6000 years.
Read more: Museum of horses